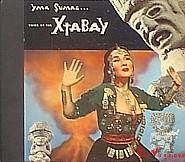 catalog no: CD-244
This was Yma Sumac's first album after arriving in the United States in 1946. Before that, she recorded a number of sides in Argentina in 1943.