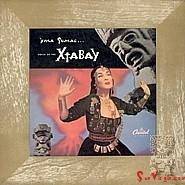 catalog no: H-244
Reissue of first album, with wood-grained border and b/w back cover photo. This release, as with many European pressings, has the cover art and wood grained border printed together and unlike many others, it does not have the High Fidelity logo on the cover below the Capitol logo.