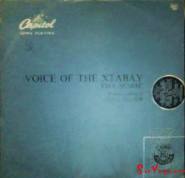 catalog no: LC.6522
This pressing was actually manufactured in the U.K. but was made specifically for the South African market.  It differs from the U.K. release in that it has liner notes and the South African "Seal of Guarantee / Waarborgseël" along with some slight differences on layout.


A review is available. The Tiki logo is not on the actual artwork.