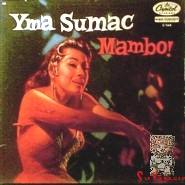 catalog no: L-564
As with most South American pressings, this release from Brazil was made by Odeon.

Hide listing
Other entries with this title
Electronic Downloads
Mambo!

catalog no: EAP 1-564
One of Yma Sumac's most popular albums, Mambo! was released many times over around the world. This French release is part 1 of a two part EP. 1955 France
Mambo!

catalog no: EAP 2-564
One of Yma Sumac's most popular albums, Mambo! was released many times over around the world. This French release is part 2 of a two part EP. 1955 France
Mambo!

catalog no: EAP-1-564
Australian pressing with Optional Centers, which were molded as part of the disk in such a way as to be removable. They allowed the EP to be played on a turntable without the need of a spindle adapter but once broken out, the center could not be put back in again. 1955 Australia
10" LPs
Mambo!

catalog no: H-564
This particular release was the first pressing of Yma Sumac's fifth album and both then when it was new, and now, it is one of her most popular albums. 1954 United States
Mambo!

catalog no: M-11892
Reissue of fourth album with additional tracks from Capitol vaults.  This is an abridged version (as noted on the lower back sleeve) which is missing Cha Cha Gitano from side two that is found on most other 12" LP and later reissues. 1979 United States
Mambo!

catalog no: 599331
Some later reissues of this title were abridged and had only ten tracks but this one is complete with eleven. 1987 France
Mambo!

catalog no: 7 80863
Reissue of fourth album which had only eight tracks, with additional tracks from Capitol vaults to fill the larger 12" LP format 1987 Greece
Mambo!

catalog no: UV-120
Another vinyl release by the Italian company which already released Voice of the Xtabay, Inca Taqui and Legend of the Sun Virgin on vinyl. 2005 Italy
Compact Discs
Mambo!

catalog no: 0777-7 8063-2-1
CD reissue on the Capitol Right Stuff label. From Canada, this release has a clear tray rather than a solid yellow one as found on the U.S. releases and has advertisments behind the disk. Image at the right shows the cover in the tray with the Valu Plus text showing from below.. 1996 Canada
Mambo!

Peruvian CD-R reissue of Mambo! using the Fuego del Ande cover art.  It is not known if this is a promotional release or a homemade CD-R.  2000 Perú
Cassette Tapes
Mambo!

catalog no: 4 M-11 892
This is the first, and as far as we know, the only cassette reissue of Yma Sumac's fourth album.  She toured and performed in several U.S. cities as part of the promotion, inclusing The Ballroom in New York and Theatre on the Square in San Francisco.  Abridged, this cassette release is missing Cha . . . 1987 United States
Back to Top