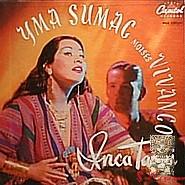 catalog no: H-423
One of the few known releases from Columbia, it was apparently released in the U.S. printed sleeve.