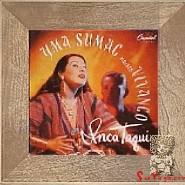 catalog no: L-423
Unusual European pressing with woodgrained borders printed with the cover art, rather than the 7" cover art being pasted over a standard bordered 10" sleeve.