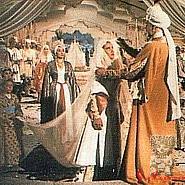 Unfortunately, simultaneous with [Yma Sumac's late '50s] diminishing public appeal was the deterioration of Yma's marriage to Moises.  On December 20, 1956, they were separated.  It was generally held that the paternity suit [brought against Moisés Vivanco by Yma Sumac's personal secretary, Maureen Shea] was the cause.

While in the midst of this turmoil, Yma participated in her second and final film for Paramount Studios, The Loves of Omar Khayyam.

Directed by William Dieterle and categorized as an Action/Adventure film, it starred Cornell Wilde, a young Sebastian Cabot, Raymond Massey, Michael Rennie and Debra Paget.  The film utilized Yma even less than the earlier Secret of the Incas.  Artistically, the 101 minute movie remains a forgettable event for Yma and her many fans.  Based on the [fictional] heroic life and times of Persia's most famous poet-patriot, Yma's musical contributions for the entire movie were trimmed to about four minutes and consisted of unimpressive and trite music.  Only one recognizable Sumacian theme emerged - a single phrase of "Lament" which, considering the recent events in Yma's life, was most apt.

Additional Notes: The text above was taken out of context so the bracketed text was added by the Webmaster in order for it to make more sense.