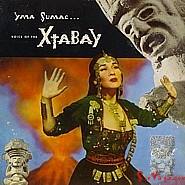 catalog no: CDF-244
This is one of the early pressings of Yma Sumac's first U.S. album and was released right after the 78 set.