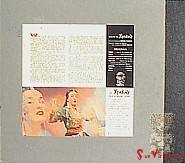 catalog no: CD-244
This album, which was recorded in 1950, is a reissue of Yma Sumac's debut album. The original pressings did not have the wood grained border around the cover art as seen on this later reissue. By the time this one was made, 78s were falling out of favor so that this pressing is rather rare today.