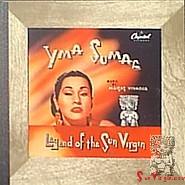 catalog no: DDN-299
Canadian release of Yma Sumac's second album, recorded in 1952.  Except for tiny details, most Canadian pressings are nearly identical to the U.S. pressings.  Liner notes are in yellow on the back of the box