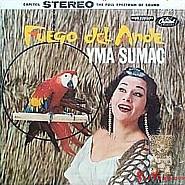 catalog no: ST-1169
Sixth album, this stereophonic version had many tracks recorded separately from the monophonic versions. This was Yma Sumac's first stereo recording.