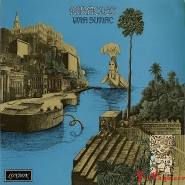 catalog no: SHA-U 135
Seventh album, recorded in 1971, this German pressing was made without the consent or knowledge of the producers as were those from several other countries as well.