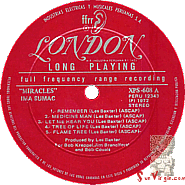 catalog no: XPS-608
Seventh album, recorded in 1971, this particular pressing is from Peru. Although made in Peru for the Peruvian market, it has liner notes that are in English.