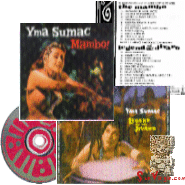 catalog no: TK-504
Compact disc made from vinyl sources pairs two records on one disk, with the two original cover arts on opposite sides of the CD packaging.  It is interesting to note that this CD has the uncut version of Sojello which has not been heard in that form since the early releases after which the master was apparently damaged.

A copy exists in the Archives in case there are specific questions about it. In some countries, such as the United States, where the public domain laws are different, this may be considered to be a Bootleg release. The Tiki logo is not on the actual artwork.