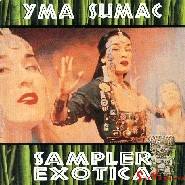 catalog no: 7243837518-2-2
Reissue of CD single with a track each of the 1996 CD reissues and new cover art to match the Ultimate Yma Sumac Collection