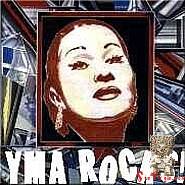 catalog no: JOM-1027-2
First legitimate reissue of Miracles and featuring two previously-unreleased tracks in all-new packaging.  This highly-collectible Compact Disc was made in very limited quantity and each one is serialized with a unique serial number.


A review is available. This item or the material it contains is available in the Shopping area of this site. A copy exists in the Archives in case there are specific questions about it. The Tiki logo is not on the actual artwork.

Historical notes
Liner Notes
For a whole new generation and for her "Xtabay" friends, here is "Yma Rocks!"  If you are wondering what is in store for you, just listen to the raves of some of the critics:

CASH BOX / Album REVIEWS, POP BEST BETS:
"If you were around during the mid-Fifties, you remember Yma Sumac, who burst upon the music scene at that time.  Her voice is, to say the least, intriguing.  If you've never heard her, you're in for a surprise and maybe even a jolt.....  The artist makes an exuberant return to the recorded field working with a number of Les Baxter tunes as well as really cutting loose on ...."El Condor Pasa".... if she is your cup of tea you'll rejoice at her reemergence."

BILLBOARD ALBUM REVIEWS:
"Last time Yma Sumac and Les Baxter teamed, they came up with the phenomenal classic "Voice of the Xtabay." They now reunite to a totally "today" sound..... delivered in an exceptional sound by the incredible voice of Miss Sumac.  Four-piece rock band lends heavy support to the vocal work....... could prove a smash"

DISCoveries:
"The music itself is a wordless rock experience.  Songs such as "Remember" and "Flame Tree" highlight Yma's brilliant improvisational vocal skill."

COOL and STRANGE MUSIC! MAGAZINE:
"Imagine all of her (Yma) trademark chirps and warbles backed by Van Halen! The results were striking, yet still uniquely "Sumacian"

RE SEARCH MUSIC:
"..... great acid wah-wah guitar mixed with her four octaves.... it is one of the most psychedelic records ever made....  On some songs she makes these nonsensical sounds and is very experimental without any self-conscious trying to be experimental.  "Remember" is good.....  It has a really insane version of "El Condor Pasa".... it reminds me of Nina Hagen with these intense, guttural rants."

MICHAEL'S THING:
"The general favorite is the cut called "Magenta Mountain" This is an alluring melody which begins in the icy stratosphere of Yma's still thrilling upper register and descends to the depth of the soul.  The voice is in excellent condition and it is heard both in "straight" and in wild aural fantasies cascading like the sparks in a fireworks display..."

TAGES-ANZEIGER, ZURICH:
"Equally as convincing and breathtaking as 20 years ago, Yma Sumac sings over five octaves to the sound of hard rock of a four-man group consisting of guitar, bass, organ and percussion.  Modern recording techniques present this most unique voice in the world for the first time in a manner the old records....  could not cope with, the incredible heights and the contemporary, somewhat psychedelic-sounding music provides the background for Yma Sumac, producing a deeply touching and supernatural sound...."