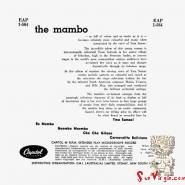 catalog no: EAP-1-564
Australian pressing with Optional Centers, which were molded as part of the disk in such a way as to be removable. They allowed the EP to be played on a turntable without the need of a spindle adapter but once broken out, the center could not be put back in again.