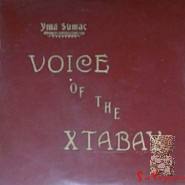 catalog no: H-244
Import reissue of first album burgundy cover with gold embossed text, without cover art of any kind.  Has B/W back photo, probably dates to a later 10" LP reissue.