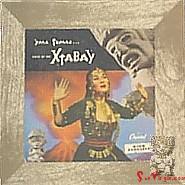 catalog no: L-244
Later reissue of first album, with woodgrained border and b/w back cover photo