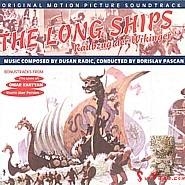 catalog no: TT3007
Soundtrack recording under the title The Long Ships (1964) but contains eight tracks of Yma Sumac's second Hollywood film, though her tracks are not on this recording. She did sing three songs in the film, two of which were written specifically for it and are listed below. The third was only a bar or two of Lament from Legend of the Sun Virgin. This is the only CD reissue known.

A review is available. A copy exists in the Archives in case there are specific questions about it. In some countries, such as the United States, where the public domain laws are different, this may be considered to be a Bootleg release. The Tiki logo is not on the actual artwork.

In film but NOT on this soundtrack recording: