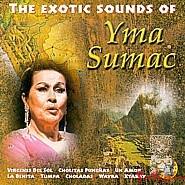 catalog no: SOW 90201
Compact Disc compilation from Holland, which is the first time that any of the early 1943 tracks from Argentina have been heard on a CD release outside South America. There is lots of ambiguity in this CD's country of origin (it indicates that it was made in Portugal in some places and The Netherlands in others), coupled with the lack of any EMI / Capitol Records copyrights, coupled with the recording label itself, which leads us to believe that it is an unauthorized release.

A copy exists in the Archives in case there are specific questions about it. In some countries, such as the United States, where the public domain laws are different, this may be considered to be a Bootleg release. The Tiki logo is not on the actual artwork.

Historical notes
Liner Notes
This collection of recordings from Yma Sumac showcase both the unique singer's remarkable vocal abilities and the repertoire of compositions by Moises Vivanco on which she often concentrated.  These tracks are drawn in part from the recordings that first made Yma Sumac an international sensation in the 1950s.

Some controversy has focused on Yma Sumac's identity as a Peruvian singer.  In the early '50s, when Sumac was beginning to become world-famous, the rumor that she was in fact a housewife from Brooklyn named Amy Camus ("Yma Sumac" spelled backward) gained great currency and is still widely believed today.  Authoritative sources insist -- citing abundant evidence -- that Sumac was indeed a Peruvian singer from the high Andes Mountains and that the Amy Camus rumor began as a joke made by another musician.

Her official biographer states that she was born Zoila Emperatriz Chavarri del Castillo in the 1920s, in Ichocan, Peru.  She began performing in her teens under the stage name of Ima Sumack, appearing on Peruvian radio.  In the 1940s, Moises Vivanco, the bandleader and composer whose work dominates this collection, hired her and helped to make her a star not only in Peru but also throughout South America.  By 1947, Vivanco and sumac were married.

They soon traveled to New York City, where Sumac was featured with Vivanco's Conjunto Folklorico Peruano.  Her extraordinary voice -- she was said to have a five-octave range -- as well as a look and style that many Americans found exotic, brought her to the attention of Capitol Records in 1959.  Tracks 9-16 on this collection are drawn from this period.

Sumac's interpretation of these Vivanco compositions made her a number-one pop artist in the early '50s.  The recordings tapped into a fascination on the part of the American public with rhythms and sounds associated with South America: the songs which purport to be based on Incan ritual music, are mainly designed to show off Sumac's range and her mysterious presence and style.  Throughout the decade, Sumac continued to record and to appear widely with various orchestras.  She also began a film career, appearing in Paramount's "Secret of the Incas" and "Omar Khayyam."  She also starred in the Broadway musical "Flahooley," from which three bonus tracks are featured here.

By the end of the decade, many things had changed in American popular sone, and Sumac's relationship with Capitol came to an end.  Her career, however, was not over.  Her six-month 1961 tour of the Soviet Union was a sellout; that tour, which also featured Cholita Rivero and Vivanco, was captured on a popular live album recorded in Bucharest.  In New York, she occasionally appeared at Chateau Madrid and other live venues in the late 1960s.  In 1972, she released the album "Miracles" -- billed as a "rock tour de force."  She then returned to Peru and spent many years living there, concentrating, throughout the '70s and much of the '80s, on composing songs. although she also made concert appearances in Peru and New York.

In the late 1980s and the late 1990s, Yma Sumac was again more firmly in the public eye.  "Stay Awake," a collection of songs from Disney movies recorded by various artists, featured a Sumac track.  She moved to the Los Angeles area and in 1990 appeared in Stephen Sondheim's "Follies" in Long Beach.  Her unusual career continues: in recent years, she has appeared at the Ballroom in New York, Theatre on the Square in San Francisco, the Montreal International Jazz Fewstival, and elsewhere.