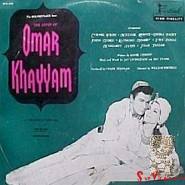 catalog no: FR10-1492
While U.S. soundtrack LPs of this 1957 film were paired with another movie score, this one has Omar Khayyam by itself on the smaller 10" LP format.  As with the others, Yma's tracks are missing.

In film but NOT on this soundtrack recording: