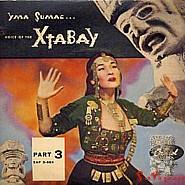 catalog no: EAP3-684
Part 3 of set from Norway has tracks from both Voice of the Xtabay (1950) and Inca Taqui (1953) so is actually a compilation rather than an original reissue.