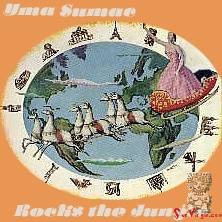 The Miracles Concept - This album was never made but became the 1971 rock recording called Miracles. The information on this page outlines the original thoughts for the album and describes how it ended up at the final result.

The songs listed below are among those that were being considered for the original album, which was to be called Yma Sumac Rocks the Jungle, or alternately, Jungle Rock. It is unfortunate that none except Wifala (in 1943) were ever recorded by Yma Sumac because it is truly wonderful material. Pockra was also heard during Yma Sumac's early concerts but only as an instrumental.

The suggested cover art shown here, which was a Christmas card that Yma Sumac used for friends, was sent by Yma Sumac from Beverly Hills to Miracles producer Robert Covais in New York on August 18th, 1971 - after the actual Miracles album was recorded but before it was mixed and released. It was accompanied by a letter which said, in part:

"My dear Bob. This Christmas card is very good for the cover of my record album (the new one) of course without Mr. Vivanco and my son., only Y.S. flying with the beautiful llamas arond the world."

(spelling and punctuation are Yma Sumac's; Moisés and Charlie Vivanco have been edited out of the conceptualized cover art shown here)

When the producers were having dinner with Yma Sumac one evening at a restaurant in Los Angeles while there in preparation to recording the album, Les Baxter, coincidentally was at a nearby table. When he noticed them and came over, they told him what they were doing and he invited them to his place where he happened to have some out-of-work musicians staying. This group, known at the time as Kansas, recorded at least one LP under the name The Cohan Brothers. Between the band, Les Baxter and Yma Sumac's own great skill at improvisation, an entirely new album was born!

Les Baxter promised to provide completely original material for the album. However, it was clear that most songs had been recorded before on one of his earlier LPs although, of course, Yma Sumac and the producers did not realize it until much later.

Later, when going into production, the liner notes and cover art were changed by Les Baxter, without approval of Yma Sumac or the producers. These changes were not known until the album was released. The unapproved changes to the liner notes, which made it appear that Les Baxter was responsible for Yma Sumac's voice and career, along with the changes in the title and cover art, precipitated a law suit (or a threat of one) made by Yma Sumac against Les Baxter, KBC International and London Records, causing the release to be 'pulled' from stores shortly after it was released.

Additionally, Les Baxter took credit for being the record's producer, when he was not. It was actually produced by Robert Covais and his friends at KBC International, a somewhat fictional company based on the first letter of the three producers' last names.

Historical notes
Liner Notes
Since this proposed recording was never produced or released, there are no liner notes.
Tracks
Back to Top