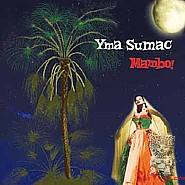 catalog no: UV-120
Another vinyl release by the Italian company which already released Voice of the Xtabay, Inca Taqui and Legend of the Sun Virgin on vinyl.