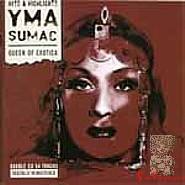 catalog no: BLUE102CD
Double CD collection features remastered tracks from the 1943 Argentina Session along with those from the Capitol Records years.

The enigmatic Yma Sumac possesses one of the most remarkable singing voices in the long history of popular music, and is a legendary South American performer who has electrified the world, and enchanted millions of fans, with her amazing vocals and exotic musical arrangements.  Yma's spectacular five-octave range, which at the height of her fame and success, spanned baritone, soprano and high coloratura, enthralled record buyers and audiences throughout the Fifties and reissues of Sumac's recordings during the ensuing decades have ensured her legend has remained intact and that her spine-tingling music survives into a new century.

Interest in the great lady's recording work has remained high and, indeed, this spectacular new collection of Sumac recordings will ensure that her music continues to be heard by fans both old and new all around the world.

The world of Yma Sumac has always been shrouded in mystery and indeed the publicity campaign that originally launched her recording career over half a century ago helped to perpetuate this.  Sumac was reportedly born Zoila Emperatriz Chavarri del Castillo, on 10th September 1927 (although some sources suggest that this event could have been anytime between 1921 and 1928!), in the remote mountain region of Ichocan, a small Quechuan village situated some 16,000 feet high in the Peruvian Andes.  As with the date of her birth, some mystery has always surrounded Yma's actual real name - known to her fans as Yma Sumac, she has also been called Amy Camus, Imma Summack and Emperatriz Chavarri.  There was even speculation of her being an Inca princess, following claims that she was directly descended from Atahualpa, the last Emperor of Peru.  Official documentation has indeed claimed that her mother, Donna Emilia Atahualpa, a full-blooded Quechuan, was a descendent of Atahualpa, while Yma's father Sixto Chavvari del Castillo's own bloodline was part Spanish and part Indian.

Yma was the youngest of six children, and as Inca descent is passed through the youngest child (based on the theory that such a child benefits from the experience and wisdom of her elders in the family) so the theories about Sumac being an Inca princess proliferated.  The exotic Sumac legend also flourished thanks to stories that she spent her childhood in Peru "talking with the birds, beasts, the winds, and the sounds of life and nature" that abounded around the remote village where she was raised.

Yma herself has been quoted: "The birds were my inspiration since I was a little child.  When I was six or seven years old I had a tremendous impression in my heart that the way they were singing was an inspiration for me … I've never had a {singing} teacher in my life, the only teacher I've ever had is Yma Sumac.  I mastered my voice since I was a little girl.  I knew I could sing when I was nine years old and my voice was very high, then when I was 13 or 14 I discovered I could sing low too.  Then I taught myself to master between the high and low."

While still a very young child, Yma took part in the many religious pageants and services of the sun-worshipping Indians.  It was during these spiritual occasions that her remarkable singing voice began to be noticed and commented upon by her fellow villagers, and word of her musical gifts soon spread far beyond the boundaries of Ichocan.  Apparently when rumours of this precocious vocal talent reached the Peruvian capital of Lima, a government delegation was sent to Yma's home village to see and hear this remarkable child for themselves.

While still in her early teens young Yma starred at a music festival held in the Pampa de Amancaes, a natural amphitheatre on the outskirts of the capital city of Lima.  However the big turning point in her earliest professional fortunes came when the bandleader and composer Moises Vivanco discovered her.

Vivanco, himself half Quechua and half Spanish, managed Compania Peruana de Arte, a 46-strong troupe of Indian dancers, singers and musicians, and invited Yma to join them.  Her mother however refused permission.  Undaunted Yma rehearsed secretly with the ensemble ands this led to her first radio broadcast in Peru.  Her mother again remained strongly opposed to Yma pursuing a professional music career but, with the encouragement of her father and other family members, Sumac's ambitions prevailed and her mother finally backed down.

Sumac's professional relationship with Vivanco soon became much more personal: on 6 June 1942, while still a teenager, she married her musical mentor.  The new Mrs Vivanco travelled with his company around South America, singing in Buenos Aires, Rio de Janeiro, Mexico City and indeed throughout South and Central America.  She made her radio broadcasting debut in 1942 and her first tentative recordings, a selection of Peruvian folk songs released under the name Imma Sumack, on the Odeon label in Argentina, followed in 1943.

After the Second World War the Vivancos left South America for New York City where Sumac continued to perform with her husband's band Conjunto Folklorica Peruano.  Indeed the legendary soprano and actress Grace Moore (who was killed in an airplane crash at Copenhagen Airport in 1947), had earlier offered to sponsor Yma's arrival in the United States, after hearing her sing in Lima in 1941.  These plans had to be put onto the back burner after the U.S. entered the war.  After eventually arriving in the Big Apple in January 1946, along with her husband and his cousin Cholita Rivero, Yma studied music for four years while Vivanco worked on his arrangements of native Peruvian music.  The three also performed as the Inca Taky Trio, with Moises Vivanco playing guitar, Cholita Rivero singing contralto, and Yma soprano.

For the next four years the trio performed in many of the clubs in New York's Greenwich Village, as well as playing at private functions.  Word once again began to spread about Yma's extraordinary vocal range and reached the ears of Capitol Records.  In 1950 Yma was signed to Capitol, beginning a long and successful relationship with the company, which spanned the entire decade, and during which she released a series of sensational album recordings featuring Hollywood-style versions of Incan and South American folk songs.  Sumac was an immediate hit with American audiences, thanks to her truly remarkable voice, and exotic looks and stage personality.  Her record releases during this period included two ten-inch albums Voice Of The Xtabay and Inca Taqui, while other 12-inch albums like Legend Of The Sun Legend, Mambo, Legend Of The Jivaro and Fuego Del Andes, all released by Capitol, also attracted critical acclaim.

Yma also augmented this recording success with regular radio broadcasts and guest appearances in several movies.  There was also a landmark concert appearance at the Hollywood Bowl on 12 August 1950, which cemented her reputation as a truly exciting new singing discovery.  Yma's incredible five-octave voice brought in rave reviews and set the wheels in motion for her future success.

Capitol Records launched Yma's recording career amidst a series of cleverly devised publicity campaigns, which shrouded her Peruvian origins in a cloak of mystery.  Fans were tantalised by the stories that she was indeed an Inca princess; the more cynical suggested that she was actually a Jewish housewife from Brooklyn called Amy Camus (Yma Sumac spelt backwards).  The liner notes for one of her early albums claimed that Yma was a royal Sun Virgin of the High Andes who had been kidnapped by anthropologists! It was reported that government scientists had proved that she could sing notes so high that only dogs could hear them.  What could not be denied was that Sumac's incredible five-octave range had the power to totally enthral anybody who listened to it.  Her first ten-inch album sold over half a million copies in just a matter of weeks, and was followed by other big-selling albums in the Fifties.  They explored a variety of musical styles including mambo, jazz, folk and traditional, including even Inca sun worshipping songs.

The Washington Times-Herald critic Glenn Dillard was sufficiently moved to write: "Her voice has a greater range than any female voice of concert or opera.  It soars into the acoustic stratosphere, or it plumbs the sub-contralto depth of pitch with equal ease.  Such voices only happen once in a generation." Praise indeed.

During the Fifties Sumac's star continued to shine brilliantly.  She made her Broadway stage debut in 1951, appearing in the musical Flahooley and performing three songs written for her by her husband, although the production proved to be short-lived.  Yma also performed at New York's Carnegie Hall as well as appearing at the Roxy Theatre with Danny Kaye.  These appearances were augmented with regular seasons in Las Vegas, as well as concert tours of South America and Europe.  In 1954 Sumac also appeared in the film Secret Of The Incas, which starred Charlton Heston and Robert Young, and three years later she appeared in another movie, Omar Khayyam.

In the late Fifties Yma and her husband Moises Vivanco divorced, only to re-marry again in the early Sixties and then divorce again.  In 1961 Yma became one of the first western artists to perform concerts behind the Iron Curtain, touring the Soviet Union and several other communist countries.  In fact one of her concerts - in Bucharest, the capital of Romania - was recorded for release as a live album.

Shortly after her return to the United States Yma Sumac made the decision to retire from full-time work and indeed she spent the next few years living quietly, making only the occasional public singing appearance.  In 1971 however she was encouraged to return to the recording studios, working with a four-piece rock band and subsequently releasing an album called Miracles on London Records.  Unfortunately the project became mired in legal problems resulting in the album being withdrawn very soon after it was issued.  This was followed by several concert appearances in Peru, and Yma also made a rare concert appearance at the Chateau Madrid Club in Manhattan.

Some 13 years later Sumac played a three-week engagement at New York's Ballroom, following it with some live concert dates in San Francisco, and then in 1987 she recorded a song for Stay Awake, an album of Disney songs.  In March 1990 Yma played the role of Heidi in Stephen Sondheim's musical Follies at Long Beach, California.  1991 saw more Sumac activity when she produced a CD single herself, featuring some of her earlier recordings in the background, along with new instrumentation and vocals.  In 1992 a television documentary, Yma Sumac: Hollywood's Inca Princess, told the story of her remarkable career although Yma herself refused to participate in the programme.  In 1996 Yma made more concert appearances in San Francisco and Hollywood, followed by live appearances at the Montreal International Jazz Festival in 1997.  More recently, Yma has lived quietly at her home in Los Angeles.

From time to time there are rumours that Yma Sumac is about to re-emerge from her self-imposed retirement; there have even been suggestions that she should go into the recording studios again.  Time along will tell whether this genuine singing icon will reappear, but in the meantime there is Yma Sumac's rich legacy of recordings still to be discovered by those hitherto unaware of her remarkable talents, and for older fans to still enjoy.  The 54 recordings featured on this new collection emphasise the richness and extraordinary range of Yma's singing style and cover a wide array of musical influences from many parts of the world.  If anyone remains unconvinced about the potency and magic of Yma Sumac's unique singing style, then this collection will sure convert him or her, and make them die-hard enthusiasts of this legendary performer!