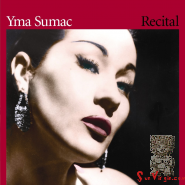 catalog no: ESPDISK4029
Remastered CD reissue of Yma Sumac's 1961 concert in Bucharest, Romania contains all original 13 tracks and one additional track that was previously unreleased on the original LP. The tracks are in an all-new order in which they were likely performed. Unlike an earlier CD release, which came from cassette tape copy from a vinyl source, this new release was made from the original master tapes and is fully licensed.

With the release of Voice of the Xtabay in 1950, people all over the world were astounded by one of the most unusual voices to emerge on the musical scene: Peruvian singer Yma Sumac, who glides effortlessly from contralto to coloratura, her voice covering a range of no less than four octaves! As long as records were the only evidence of her performances, there was no shortage of skeptics who doubted the authenticity of the recordings. But as Yma Sumac began to perform in concert halls all over the world, it became clear that the recordings were no mere studio tricks and that her records faithfully reflected her talent.

The voice of Yma Sumac is indeed a miracle of nature. However, if that were all she was, the public's interest would not have gone beyond mere curiosity. What has made the singer's abilities so striking is the fact that she has managed to use the immense vocal resources at her disposal, resolutely striving for genuine artistry. Her early repertoire included popular music and jazz pieces, which she performed in her own inimitable and scintillating style. However, by 1961, when this recording was made, she had abandoned this path, devoting herself to the noble and challenging goal of making known the music of her homeland. The folklore of Peru, influenced by the Spanish musical tradition, has become widely known and appreciated, due in large part to the artistry of Miss Sumac. In addition to Peruvian music, folk songs from neighboring countries - Bolivia, Chile, etc - became a major part of Yma Sumac's repertoire.

In June, 2006, Yma Sumac was honored by Peru's highest tribute, the Orden del Sol (Order of the Sun) medal. To receive the award, and many others including the Key to the City of Lima, she visited Peru, where she created a reawakening of her music in South America. She was received warmly by fans of all ages. We hope, in our own small way, to also honor her with this release of a rare moment in musical history!