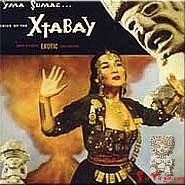 catalog no: CREVO 34 CD
Reissue of compilation with previously-unreleased material. This reissue contains a slightly different track selection than the original

Show others with this title (3 entries) Back to Top