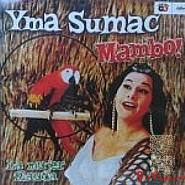 Peruvian CD-R reissue of Mambo! using the Fuego del Ande cover art.  It is not known if this is a promotional release or a homemade CD-R.

A review is available. In some countries, such as the United States, where the public domain laws are different, this may be considered to be a Bootleg release. The Tiki logo is not on the actual artwork.