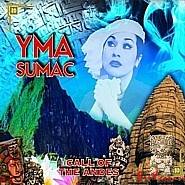 catalog no: BYD77004
27 track compilation featuring pre-1955 material along with several 1943 Argentina Session tracks. Good selection of material but the booklet contains many inaccuracies over the usual. For example, her name was spelled as Ymma throughout when that spelling was used only on one obscure release from the '60s, and it states the lyrics of Wimoweh when Yma's version had no lyrics at all. A corrected version of the notes has been posted.

Historical notes
Liner Notes
The following notes contain many errors; a corrected version has been posted separately.
When the Spanish conquistador Francisco Pizarro (c. 1475-1541) reached Peru in 1531, he found a highly artistic and sophisticated people.  The city, of Cuzco (Track 11) with nearby Lake Titicaca had been firmly under the control of Quechan Indians for centuries.  Song and dance had always held a prominent place in the rituals of the Andean Peoples, and inextricably linked with music were their 'raymi' (festivities), which comprised feasts in celebration of the sun, the completion of sowing and gathering the harvest, each season having its special dance or song, rendered by one word 'taki' (Tracks 13, 21), which sufficed for both.

There is richness in the Peruvian musical instruments which generously accompany the singers.  There are ocarinas, conch shell trumpets, gourd-rattles, Pan-pipes, Peruvian flutes (with five holes) originally made from the leg-bones of llamas, and more modern ones, with seven.  Once the colonists had settled, the Incas added Spanish instruments of their own: violins, guitars, harps and others.

It is against this colourful musical background that the multi-talented composer, arranger, bandleader and singer Moisés Vivanco (1918-98) wrote for his wife Ymma (later Yma) Sumac to bring music from Peru, first to the rest of South America, then to the rest of the world.  Ymma was born between 1921 and 1929 (various conflicting dates have been given), but most likely on September 13, 1922, in Ichocán (Cajamarca, Peru) or possibly in nearby Lima, the Peruvian capital.  Her family name is said to have been Zoila Augusta Emperatriz Chavarri de Castillo, but by the 1940s she had adopted the stage name of 'Imma Sumack', in its various spelling variants.

Inspired by Peruvian-Indian folklore and its musical traditions, while still in her teens Ymma began to perform in public recitals and on radio, her exceptional vocal range of more than four octaves adding an exoticism to Vivanco's adaptations.  A transformation was about to take place in Ymma, however, from being essentially a folk-singer (a capacity in which she even appeared at the Hollywood Bowl), she was about to exploit her natural beauty and exotic stage presence more fully than previously.  In the late 1940s Capitol Records signed up the 'Peruvian Princess' and changed her name to Yma Sumac.  Vivanco would remain very much in the picture, however, working closely with West Coast musicians, most notably Les Baxter (1922-96), a composer-arranger with a distinct penchant for the jungle-exotic.

Later, Vivanco and Sumac, accompanied by a coterie of native Peruvian musicians all based in California, were drawn towards another Capitol arranger, Billy May (1916-2004), now best remembered as a promoter of the Cuban mambo.  The success of the Vivanco-Baxter-Sumac album Virgin Of The Sun God was so immediate, that people normally incapable of listening to a recording made by an ethno-musicologist were suddenly started wearing ponchos and planning holidays in the Andes.  Virgin of the Sun God and Legend of the Sun Virgin not only helped popularise a new record label but also raised the awareness of the entertainment-seeking public to the existence of the 10-inch long-playing record.  From the 1960s to the 1980s Yma Sumac continued to give worldwide concert-tours, including regular appearances at the Montreal International Jazz Festival, and in 2006 flew to Lima to receive several national awards.

Legend of the Sun Virgin -
In February 1950, Yma, Vivanco and Les Baxter began to promote their 'exotica' to the international market.  In Lure of the Unknown [1] Yma emphasises the contralto range of her voice to suggest the hurt of unrequited love.  In Virgin Of The Sun God [2], her first major success, her voice takes on a near-instrumental role.  Tracks 3 to 5 were recorded when she was still Ymma, and based in South America.  The late Bernard Taylor had arrived from London (in 1943) to take charge of the Odeon record company, and Sumac(k) was one of his most imaginative signings (23 tracks, 78 rpm discs).  La Sirena (The Siren) [31 is a Peruvian dance of seduction, a cueca, which became a marinera in celebration of the Peruvian sailors who served in the Pacific War of 1879-1883.  Cholo Traicionero (Treacherous Half-Breed) [4] retains a distinctly Spanish rhythm, while Amor Indio (Indian Love) [5] is one of our singer's earliest recordings, displaying the fullest extent of her range.
Back to Hollywood...
The Peruvians join forces with Les Baxter.  In Monkeys (Monos) [6], a piece with a strong Hispanic melody.  Sumac airs her extraordinary coloratura, while the drama of The Earthquake [7] affords her the opportunity to create, uniquely, an atmosphere of violence in purely vocal terms.  No less descriptive, by contrast, is Wayra [8], in which we feel, as it were, the winds as they dance.
Back to Buenos Aires, 1943...
Yma is still Ymma, the fiery folk-singer from the country, with Un Amor (A Lover) [9] (Sumac and Vivanco, incidentally, were twice married, twice divorced!).  Carnival time is celebrated in all South American countries: the marimbas (otherwise called 'the woods that sing') strike up and the singer announces that Carnival has begun (Indian Carnival -10), while Cuzco was always teeming with flutes and voices (Indian Dance -11).
Hollywood again...
The Peruvian/Baxter axis brought about global repercussions with their 1951 LP Legend of the Sun Virgin.  Here are five extracts from that ground-breaking album: Zana [12] is a dance from the coastal regions of Peru with deep-rooted Afro traditions - Yma's high notes on this track certainly contributed to the album's success.  The story goes that when Yma's close friend, the flautist Hernán Braña, found her one day in a deeply depressed, emotional state, the solution was to dedicate a new song to her: Karibe Taki [13].  Hard work was followed by success, and Yma was soon again in the best of spirits.  Lament [14] expresses feelings of sadness at the departure of a loved one.  No es Vida (This Is No Life) [15] is a kind of blues variant, as is Suray Surita [16].  Next, comes Wimoweh [17]: from the far-off Andes, Yma sings "in the forest, the mighty forest, the lion sleeps tonight", her individual version of this international hit from the spring of 1952.

Then, from 'darkest Africa', via Cuba, comes Babalú [18], by Margarita Lecuona, niece of that country's more celebrated Ernesto Lecuona (1896-1963).  As well as being a composer.  Margarita was also a distinguished mezzo-soprano in her own right.  Hernán Braña originally intended Call Of The Andes [19] to be an instrumental, but everyone thought it suited Yma's voice so well that a lyric was found and it was incorporated into her repertoire.  Andean Don Juan [20] is a remake of [4], an updating to enhance its appeal to a Hollywood audience.  Royal Anthem (Incacho) [21] is steeped in Indian tradition: another instrumental original vocally adapted to suit Yma.  My Destiny, [22] is one of the most Hispanic of all Sumac's songs, in addition to offering probably the finest illustration of her vocal prowess.

The mambo began as Cuban folk music with jazz grafted or superimposed onto it: another conquistador of Latin America, this one had no armies in attendance.  By the 1950s it had spread to the USA and into Europe, as for example in `Mambo Italiano.' Yma's mambo recordings with the Billy May Orchestra are commercial without the slightest trace of vulgarity, and are wonderfully danceable.  The brass is well in evidence, especially in Chicken Talk [23].  What about `Concerto for Three Octaves and Big Band' as a subtitle for Taki-Rari [24].  While Gopher Mambo [25] puts many another mambo to shame, Bo Mambo [26] allows `contralto' Yma to seduce both brass and rhythm.  Jungla [27] concludes our CD in the company of an Inca Princess.  If you did not believe that myth already, you will once you've heard these 27 tracks, with Yma Sumac in total command of her assignment and Billy May of his brilliant big-band beat.  A royal event indeed!