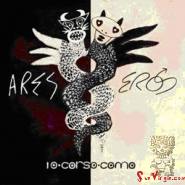 2-CD set features one track by Yma Sumac from her 1954 Mambo! album.

Historical notes
Liner Notes
10 Corso Como manifests in typical bi-polar style; we have already experienced Yin & Yang' (2001), Ida & Pingala' (2002), North & South' (2003) and so on... Often two opposites which, despite themselves, are linked. Here, we have Eros & Ares', epitomes from Ancient Greek culture of love and war, two dominant facets of the human condition.

So here, musically, the one complements the other, each subtly changing the other; the calm becomes more edgy, the vibrant becomes more muted.

10 Corso Como music fans must be accustomed by now to the drastic dichotomies that have been chasing each other on the packaging of our compilations for almost ten years. First "Yin & Yang" (2001), then "Ida & Pingala" (2002), moreover "North & South" (2003) and so forth.

The One splits in Two, as we have recalled in the past years, but on the other hand the Two piece together into the One. We always have to go back to the Unity, as it happens in all life affairs and cannot be different in music.

True to this gold principle, for this new collection (the eighth one in the series) we decided to proceed again by polarities. Therefore here are "Eros & Ares", almost to symbolize the two essential qualities in every human being.

Eros is obviously expression of unconditional Love and for this reason as already noted down by Hesiod - is endowed with unlimited power. Ares, contrariwise, is the Lord of war, contradiction principle in its hardest and purest form. For the ancient Greek, Ares was a god to distrust all the time, in fact he was always depicted with a wrathful, menacing, fierce expression. But this is not what we should expect from the music on our "Ares" including the astonishing "Canto Dei Sanfedisti" by Ginevra Di Marco. No epitomes of hatred and rage then, but more simply, sound finds more cutting and barbed than others, that can even bring to light, thanks to Eros' vital help, a softly suave trait. And in this case too, as we said before, the Two piece together into the One.