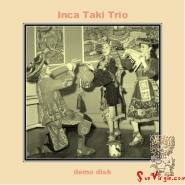 catalog no: JOM-1027-11
Recorded on October 14, 1949 as a 16" LP, this demo highlights the wide skill range both vocally and instrumentally of the Inca Taki Trio which featured Imma Sumack, Cholita Rivero and Moisés Vivanco. A variety of native instruments including the quena (bamboo flute), drums and siku (Peruvian panflute) with guitar and many with solos or vocals by all three. Although when singing together, Imma Sumack would generally sing soprano to Cholita Rivero's lush contralto, on at least one cut here they both sing contralto.

"Native Instruments" is an instrumental with quena, drums and rattles in an unknown melody.

"Qori Canastito" (Little Gold Basket) accompanied with guitar, quena, drums and rattles. This song was later recorded in 1952 by Yma Sumac (as she was known by then) as the phonecally similar Ccori Canastitay for her 1952 Legend of the Sun Virgin album but not released until the 1955 12" LP reissue. (Inca Taki Trio; Imma Sumack solo)

"Inca Taki" (Song of the Inca). After the opening Inca Taki chant there is a brief instrumental which was heard originally in the background to Un Picaflor la Desangró from the 1943 "Argentina Session" recordings followed by a guitar portion which is similar to that used later in live performances of Chuncho during Yma Sumac's spoken introduction but which did not appear in the 1953 studio recording on Inca Taqui. This is followed by a rather nice short vocal piece in an unrecognizable tune. (vocals by Inca Taki Trio; guitar solo by Moisés Vivanco; solo vocal Cholita Rivero)

"Ayacuchan Melody", a guitar instrumental in the Ayacuchan style. Ayacucho, also known as Huamanga, is the capital city of Huamanga Province of the Ayacucho Region of Peru. This is the same tune as K'arawi (Planting song) on Yma Sumac's 1953 Inca Taqui album. (guitar solo by Moisés Vivanco)

"Siku and Drums" is mostly an instrumental with siku (Peruvian panpipes) and drums in an unknown tune. Features opening and closing chanting by Moisés Vivanco and a short vocal solo by Cholita Rivero.

"Llorar por una Mujer" a marinera. This song was later reworked and recorded as Llora Corazón (Crying Heart) by Yma Sumac on her 1959 Fuego del Ande album. Generally, Cholita Rivero's voice is much lower than Imma Sumack's when singing together but in this song both are singing in the lower registers so their voices tend to blend together. (guitar by Moisés Vivanco; vocals by Imma Sumack and Cholita Rivero)

"Si te vas al Cine" humorous song accompanied on guitar. Unlike the previous piece, in this song it is very clear which vocal line is being sung by whom as Imma Sumack is singing in her high soprano for much of it while Cholita Rivero is singing contralto. (guitar by Moisés Vivanco; vocal duet by Imma Sumack and Cholita Rivero)

"Flamenco Melody" has guitar and vocal in the flamenco style to an unknown melody. (guitar Moisés Vivanco; contralto Cholita Rivero; soprano Imma Sumack; chanting by all)

"Huaquero" is a South American herder tune with guitar and, as with track 4, is played in the Ayacuchan style. This song begins with Amor from the 1943 "Argentina Session" recordings and then continues with El Huaquero which Yma Sumac later sang in a live concert in Cajamarca, Peru in 1973. (guitar by Moisés Vivanco; contralto Cholita Rivero, intro and soprano harmony Imma Sumack)

"Waytalla" (Little Flower) with guitar and drum. Vocal introduction of Witallia later heard in 1952 on Yma Sumac's Legend of the Sun Virgin album followed by a tune sounding remarkably like the introduction to El Condor Pasa. The next portion starts out sounding like the guitar intro to Chuncho from Yma Sumac's 1953 album Inca Taqui, then morphs into Dale Que Dale from her 1959 Fuego del Ande album, followed by an unrecognizable third instrumental. (Primarily instrumental with guitar by Moisés Vivanco; some Inca Taki Trio vocals at the beginning)

"Ruki Tuki" is accompanied by drums and some chanting by Moisés Vivanco and Cholita Rivero. In this piece Imma Sumack mimics the flute with a range that range centers on the lower and upper middle registers and includes some solid low Fs. (Accompanied by drums )

"Huifalita" is based on traditional Peruvian musical patterns and melodies. Imma Sumack recorded the traditional and phonetically similar title of Wifalitay (also known as Wifala or Wifalita) in 1943 but it bears little similarity to Huifalita found here. However, portions of Wifalita can be found in her later Hymn to the Sun (Taita Inty) that was recorded in 1950 on Voice of the Xtabay and this Huifalita was also described as a "hymn to the sun." (Vocals accompanied by drums and siku)

Tracks
Back to Top