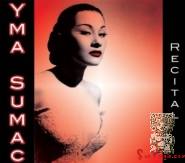 catalog no: ESP 4029
Compact Disc reissue of Yma Sumac's 1961 LP of the same title using masters from the 2006 CD reissue on the same label as part of their 50th anniversary series.  This latest release, as in the previous one, does not benefit from any mastering and simply uses the raw Electrecord tapes that were supplied for the 2006 reissue and additionally uses unauthorized booklet notes that are copyrighted by SunVirgin.com and written for use exclusively for the 2006 reissue.  The back case track listing does not match that of the booklet.

A review is available. This item or the material it contains is available in the Shopping area of this site. A copy exists in the Archives in case there are specific questions about it. In some countries, such as the United States, where the public domain laws are different, this may be considered to be a Bootleg release. The Tiki logo is not on the actual artwork.