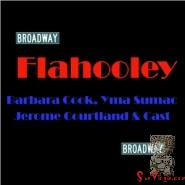 Download-only version of Yma Sumac's Flahooley, probably a bootleg as no EMI/Capital Records licensing information could be found. These are the same tracks that can be found on legitimate releases of Flahooley. The exact country of origin is unknown.

A review is available. This item or the material it contains is available in the Shopping area of this site. A copy exists in the Archives in case there are specific questions about it. In some countries, such as the United States, where the public domain laws are different, this may be considered to be a Bootleg release. The Tiki logo is not on the actual artwork.