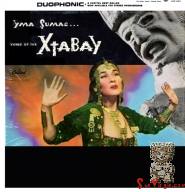 catalog no: DW-684
Duophonic (simulated stereo) LP from Canada is virtually identical to U.S. pressings other than the tiny Made in Canada notations on the sleeve and disk label.

Voice of the Xtabay
(conducted by Les Baxter)

Inca Taqui - Chants of the Incas
(conducted by Moisés Vivanco)