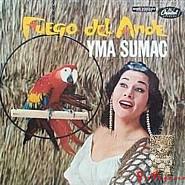 catalog no: T-1169
Only known release from Italy of Yma Sumac's six album, recorded in 1959. Though not dated, we believe this pressings dates back to the original release from 1959.