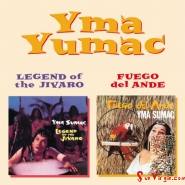 catalog no: ASIN: B00IWUL4EQ
Compact Disc version of Yma Sumac's Legend of the Jivaro and Fuego del Ande. Probably a bootleg as no EMI/Capital Records licensing information could be found. These tracks are included on legitimate releases of both albums. The exact country of origin is unknown.

In some countries, such as the United States, where the public domain laws are different, this may be considered to be a Bootleg release. The Tiki logo is not on the actual artwork.